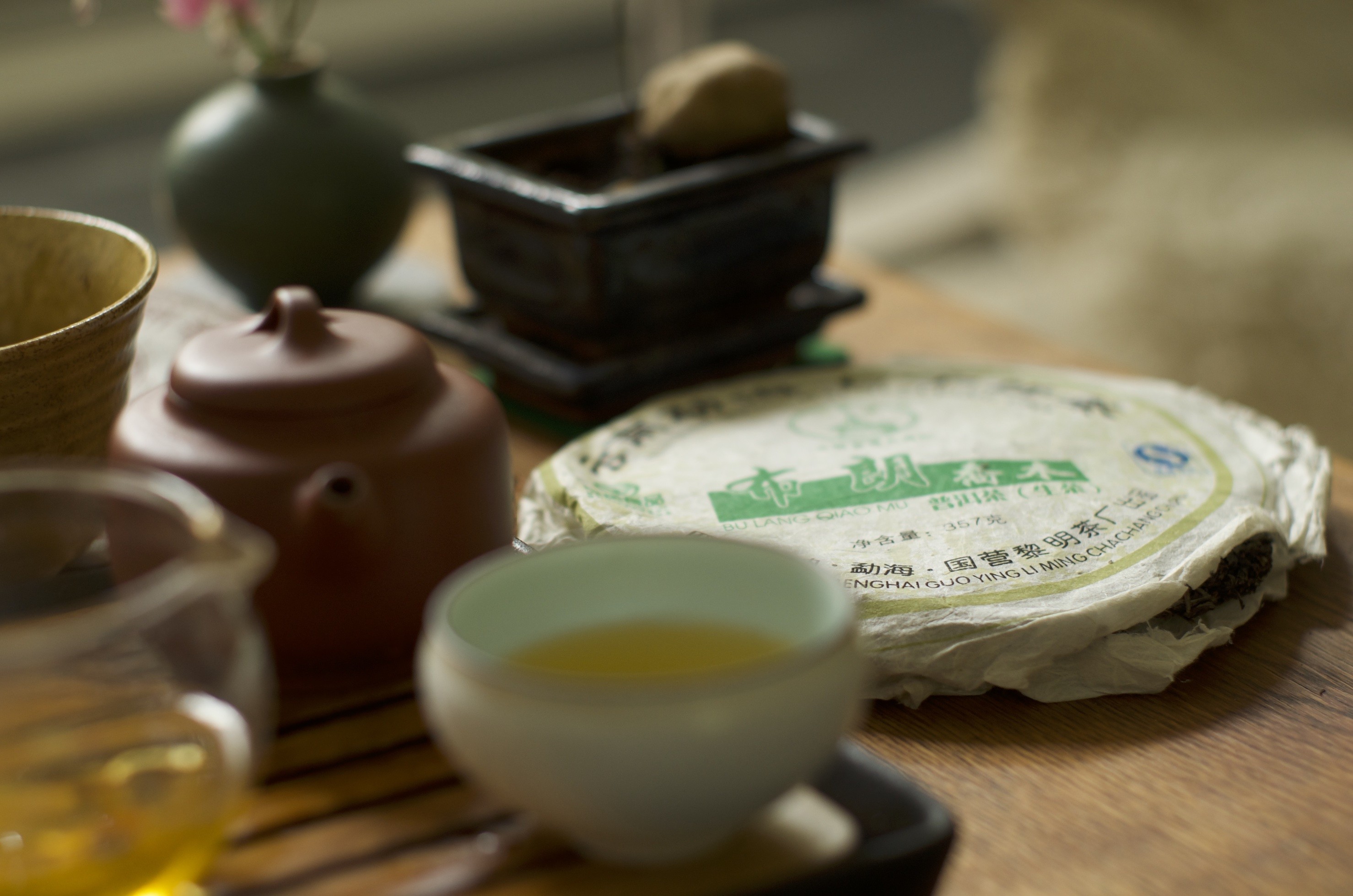 Here is a comprehensive short FAQ of Pu’er tea to give answers to questions that we commonly get. If you don’t find the answer to your question or have any suggestions or improvements feel free to contact us. (This list is constantly expanding.)

All teas, such as green, black, Oolong and Pu’er (Puerh), originate from Camelia Sinensis and its varietals. Pu’er is processed in a particular way, so that the leaves are kept in a state where they can develop their taste over time.  Pu'er originates from a south-western province in China called Yunnan.

Why is it called Pu’er tea?

In Chinese characters it is written 普洱茶.
There are different romanization standards for Mandarin Chinese. The two most prominent are: 1. The Wade-Giles system, that has been developed during the 19th century. 2. The Pinyin system, which has been introduced into mainland China in the 1950s.
In Wade-Gilles 普洱 is transcribed Puerh, while in Pinyin it is Pǔ’ěr.Hence the different spellings for the same tea.
The tea is called after the city (Pu’er) where it has been traded for a long time. The city’s name has changed to Simao in the 1950 and changed back to Pu’er in 2007.
The name itself has its roots probably in a transliteration from a Wa language (one of the minorities in the area) describing the Blang people (another minority).

What are the different types of Pu’er?

Sheng 生, also called “raw” or sometimes “green”:
To create this type the leaves are roasted in a large pan, rolled, dried and pressed. The taste of this type can change quite a lot of the span of many years.

Shu/Shou 熟, also called “ripe” or “cooked” (though it’s actually not cooked):
This type produced in almost the same way as Sheng, but before the pressing an extra step is added: the leaves a piled up and fermented for a few weeks. This speeds up the fermentation and creates a darker tea with earthy notes.

Where is Pu’er grown?

Within Yunnan are different regions, of which each tea has a slightly different taste profile. The description of a particular tea’s origin can get really fine-grained and usually follows this pattern: Prefecture, County, Mountain, Town, garden. (Note that in Chinese one usually starts with the large area and zooms in.)

How important is the production date of a Pu’er cake?

Pu’er tea transforms over time, especially the raw one. Hence, the older a tea is, the further it has gone in the process of transformation.
When fresh its taste is closer to green tea and can be quite bitter. With time various microbes help to smoothen the tea.
Pu’er of up to 5 or 6 years is mostly considered young. Older tea can be 15 years or older.

How is Pu’er tea stored?

The environment where the is stored has a big impact on its transformation and its resulting taste.
The type of storage is a hot topic among Pu’er enthusiasts. Some prefer it to be more humid whereas others like it to be somewhat dryer.
As storage is always a combination of temperature and humidity, both are important to consider.
Though preferences are different, all agree that an overly dry storage can ruin a tea. Thus, for storage of smaller amounts make sure to not keep them too cool and too dry.

Terms can be mostly be found are as follows:

Dry storage: usually refers to Kunming (the capital of Yunnan) with a relative humidity of around 65% and 24 degree

Natural Guangdong storage: This is mostly somewhat more humid and warmer. Still below 70% relative humidity, though compared to Kunming the temperature is less likely to fall and the humidity to drop

Hong Kong storage is similar, though often includes a period of traditional wet storage (see below).

Natural Taiwan storage: Many Pu’er teas have been exported to Taiwan or produces by Taiwanese Boutique brands. The results can be similar to Guangdong storage.

Wet storage: This usually refers to a practice in Hong Kong where fairly large amounts of Pu’er cakes are put in a room which humidity has been artificially increased. Usually this is done just for a limited duration and then stored naturally.

Another way of categorizing the storage is:
Dry warehouse, wet warehouse and controlled warehouse.